When Amazon released its voice-controlled personal assistant in November 2014, an important question was raised about the hands-free speaker: if the Amazon Echo is voice-controlled, then is it always listening?

Is Amazon Echo always listening to you?

Amazon Echo will activate once it detects the “wake word”, Alexa. Once it does hear its name, it then captures your request, encrypts it and uploads it to cloud servers via Wi-Fi. The servers then unscramble your phrase and return with a response, be it an answer to a query, command or initializing a ‘Skill’ which is its abilities in the way of installable apps. Therefore, in order to detect its name, the Echo has to be listening in at all times on some level. But crucially it is not always recording. Amazon is adamant that while Alexa always has an ear open during any conversation in its vicinity, it does not start to record, store or upload your speech until it hears “Alexa”.

How to stop Amazon echo from listening all the time?

The answer is YES. To turn the Echo’s mic off, press the microphone off/on button on the top of the device. Whenever this button is red, the mic is off. This causes wails of “Alexa” to fall on deaf ears. To reactivate it, just press the button again.

No, the Echo isn’t recording every word you say, and it also isn’t sending a constant audio stream of everything that’s going on in your home to Amazon’s servers. Not only would this be a privacy nightmare, it would also result in way too much data for Amazon to handle or make sense of. Amazon wouldn’t be able to target you better if it tried to generate buying recommendations based on every joke you crack, — it would be overwhelmed by all the random conversations. Only upon hearing wake word Alexa does it start to record audio for the few seconds it would take to make a request, and then send it to Amazon’s servers.

How to delete Alexa recordings in Amazon Echo?

You can delete the recordings from within the Alexa app for Android and iOS, or through a browser on an Amazon account page in the My Devices section. Whether or not this deletes the recordings from Amazon’s servers completely is unconfirmed but at least your account will never show that extra-large pizza you ordered at 3 am. 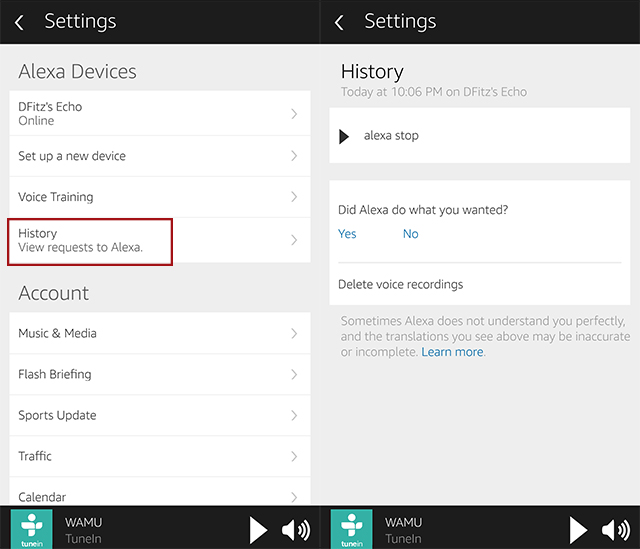 Should I buy Amazon Echo or Google Home