As Google released its smart speaker Google Home, Amazon Echo got its number one rival. Amazon Echo, as a smart speaker that responds to your voice commands, plays music, and controls your smart home, has already gotten the surprising success. With Google Home entering the arena, complete with the backing of the company’s ubiquitous search engine, the Echo’s place on top is no longer secure. But which one should you buy if you’re in the market for a virtual home assistant? Here are some key points to know about both devices to see which one might be best suited for you.

Should you buy Amazon Echo or Google Home?

In the form above, prices are compared in the first place. Many customers will concern about price first and foremost. Therefore, Google Home has the advantage. However, Amazon has dropped the price by having a promotion. Now, you can get one Amazon Echo with $139.99. Comparing to Google Home’s discount price $109, the price of Amazon Echo becomes more acceptable than before.

Google Home Is Much More Knowledgeable

Amazon’s voice assistant Alexa is capable of understanding simple commands, or even a series of commands, but she can’t conduct two-way conversations. Alexa’s default search engine is Bing, meaning that responses to all the questions you ask will be derived from the Microsoft-owned search engine.

However, Google Assistant taps into the superior power of Google’s search engine, allowing you to ask more complex questions in a more natural way. You can also ask follow-up questions, so it feels more like a conversation. Moreover, the Assistant on Google Home is the same as the Assistant built into Android smartphones, so data can be shared across both devices.

And there is an interesting video on YouTube testing the accent recognition on Siri, Amazon Echo and Google Home. The final result shows out the Google Home is the A.I. accent test winner. So, if you have an accent, you may need count in this factor.

Amazon Echo Is Better for Smart home Users (at present)

The Amazon Echo has been around for long enough that it has built up quite the arsenal of supported smart home devices, including products from Nest, Ecobee, Honeywell, SmartThings, Wink, Insteon, Belkin WeMo, Phillips Hue, Lifx, Lutron, August, Logitech Harmony, Anova, Big Ass Fans, IFTTT, Control4, Crestron, other devices via skills. Google Home supports most of the big players as well, but its full list isn’t quite as extensive.

However, both devices integrate with IFTTT, which then allows them to connect to a ton of different products and services that wouldn’t be supported otherwise. It’s not quite as seamless as native integration would be, but it makes Google Home feel less crippled in the smart home arena.

So if you’ll be using your virtual home assistant to control all of your smart home gear (which some argue is what makes these things so great), then the Amazon Echo is probably the one you’ll want to get—at least until Google Home obtains more support for more devices. In any case, you can view Google Home’s full support list of smart home devices, as well as the Echo’s list.

Amazon Echo is a 23.5 cm tall cylindrical speaker with a diameter of 8.3cm. It is fairly heavy compared to other wireless speakers, and somewhat monolithic in appearance. The bottom half of the device is covered by a speaker grille, while the top of Echo has a ring of light that you can turn to adjust volume, and buttons for mute and activation. The speaker only comes in black and white color options. 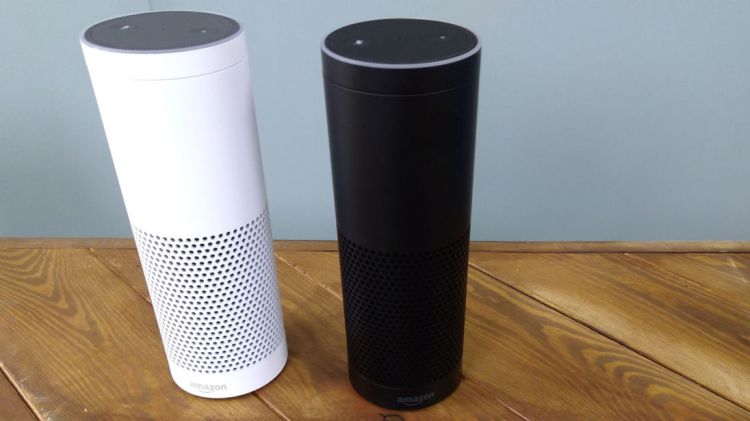 By contrast, Google Home is quite squat – with a shape supposedly inspired by wine glasses and candles. It has a sloped top, with a touch-capacitive display and four colored LED lights to provide visual feedback, and a single physical mute button on the back, which you can press to prevent Google from listening to “hot words”. The bottom of the unit is covered by a speaker grille and can be swapped out for different colored shells to suit your personal taste. There are six shell options in fabric or metal. 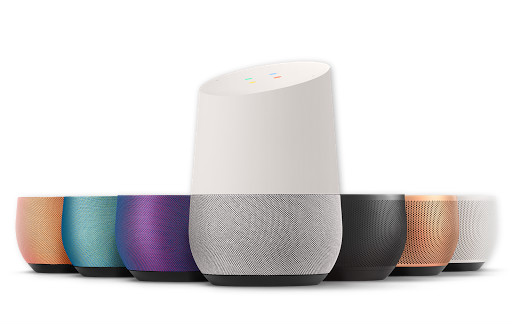 In the end, both are really good options, and it depends on what you’ll be using it for as far as which one you should go with. The Echo is better for smart home integration and has slightly better speakers, and it integrates with a lot of different services through third-party Alexa Skills, but the Google Home’s vast search knowledge is likely something that Amazon will never touch, and the Chromecast support is pretty neat if you’re invested in that area.

How does Google Home compare to Amazon Echo？