The Smart Keyboard, which is designed for iPad Pro (available for both 10.5‑inch and 12.9‑inch one), become stirred for its prominent triangle design and excellent typing experience. Differentiating itself from normal products with its unique Smart Connector which transfers both data and power between iPad Pro and the Smart Keyboard, it requires no batteries or charging. Yet, excepting some prominent features, it is still a keyboard which serves the main aim for inputting, you may wander what really makes it worthwhile to purchase. Here some detailed information will be presented firstly and a conclusion will be given in the end. 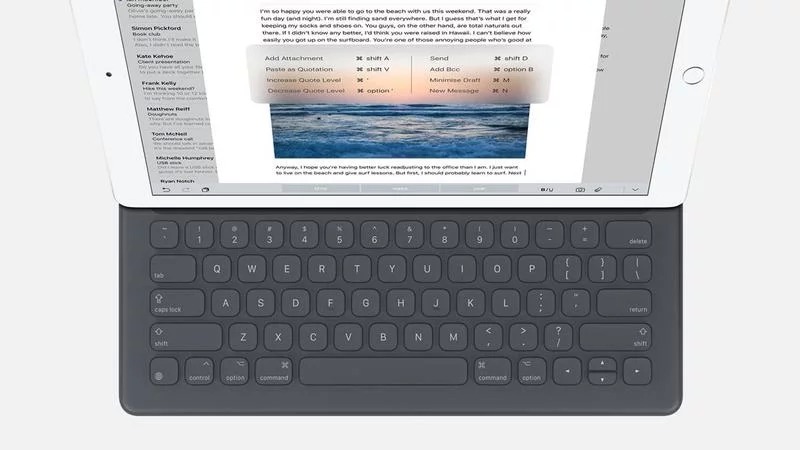 Smart keyboard is designed at 12.9-inch and weighs 225g–pretty convenient in carry. Thanks to the magnets along left edge (in portrait mode) of the iPad Pro. The keyboard folds out from the inside cover and the back of the Apple Smart Keyboard bends in the middle of the back part of the cover to form a triangle.

One of its uniqueness that makes it differentiate itself from the normal is the Smart Connector, which is on the left edge of the iPad Pro, not only transmit data between laptop and keyboard but also powers the keyboard so that no charging cables are required.

Unlike conventional keyboards, with separate keys and cracks for crumbs and spilled liquid to disappear down, it’s completely covered in resilient, custom-woven water-resistant fabric which provides spring-like tension for each key, eliminating the need for bulky conventional mechanisms.

For reasons of weight and slimness, the keys have a shallower action than those on a standalone keyboard for a desktop Mac, which makes it easier to make mistakes when typing. What’s more, due to the fact that the keys are significantly smaller and more cramped than most typists, it could be painful to type on it. However, compared with a traditional Bluetooth keyboard, Smart Keyboard is still competitive in its lower weight and needlessness in charging and connecting. If you want a 10-inch keyboard, you’re simply not going to get a slick, super-accurate typing experience right away. Smart Keyboard is one of the better mini-keyboards.

Is the a Apple Smart Keyboard Worth It

According the user’s experience, after about 10-20 minutes, people got used to the keyboard and could type almost as fast on it on 13-inch MacBook Pro. Thereby, it’s as good as or better than typing on the Microsoft Surface Pro 4’s Type Cover. According to the earlier comparison review between Apple Smart Cover and the Logitech Create iPad Pro keyboard, typing on Logitech’s keyboard feels better, but when it comes to carry it around, it doubles the thickness of the iPad Pro. On top of these, Smart Keyboard is worthwhile when you need to carry it around and avoid the troublesome in charging and connecting, yet when you solely rely on the speed of typing Smart Keyboard might lose its competitiveness in typing.