Samsung just released a new product of Galaxy Note Series in New York. In addition to the specifications and design which are stronger than the previous device, there are some eye-catching upgrades and changes in its charging. Despite the highest speed to 45W introduced in the press conference, people would find that only Galaxy Note 10 Plus supports 45W wired fast charging, while Note 10 only supports 25W fast charge. According to official sources, the 45W fast charge can provide enough power for the Note 10 Plus to use in a day’s time within 30 minutes, but its practical performance remains unclear. 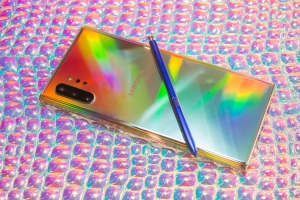 In recent years, Samsung has been progressed slowly on charging technology as its adaptive fast charging technology has a nominal power of only 15W, which has lagged far behind its competitors in the past two years. Since 2013, Samsung has been stuck in the Qualcomm QC 2.0 fast charging program, and the latest QC protocol version number has been upgraded to “4+”. Fortunately, Samsung finally returned to the Galaxy Note 10. And this time, the wireless charging gets a tad faster for both phones.

Note 10 and Note 10 Plus are upgraded in several different areas than their predecessors, such as new camera features and hardware specifications, new display screens and new fast chargings. Some media reports via Youtube channel (Gadgets Portal) for the fast charging of XS Max, Galaxy Note 10 Plus, OnePlus 7 Pro and Galaxy Note 9

First, let’s see these four phones tested, two were last year’s flagships and two were high-end smartphones in 2019. The iPhone XS Max and Galaxy Note 9 were introduced last year with 3170mAh and 4000mAh batteries; the Galaxy Note 10 Plus comes with a 4300mAh battery, and the OnePlus 7 Pro comes with a 4000mAh power supply.