With the headphone jack’s alive, presumably the wired earphones in the box along with Samsung Galaxy S10 are most likely another cooperation product with AKG like what’s on Galaxy S9. Honestly Samsung made an effort on the earphones not only just by putting an AKG name on them, but seriously improving the quality and design. According to the review conclusion from one of my favorite YouTuber Jason , the AKG earphones come with Galaxy S9/S9+ are better than what you would likely think. It’s quite a good bonus for the Galaxy S10 users if Samsung includes the same earphones or even upgraded ones.

So, do we still need to buy wireless earbuds instead? Generally the audio quality of wireless earbuds are commonly lower than the wired ones due to the wireless transmission noise and inteference, but we cannot totally ignore the clutter-free convenience they create. It’s super cool to wear wireless earbuds by avoiding the hassles of dealing with messy tangled cords, especially when we work out. Wireless earphones won’t weigh you down while you jog. Plus, Samsung Galaxy S10 introduced the PowerShare function, it can be used as a power bank to charge your Qi-certified earbuds wirelessly, the reverse charging speed is much faster than Huawei Mate 20 Pro. It’s a good motivation for S10 users to purchase a pair of compatible wireless earbuds, Samsung even provided free Galaxy buds for the pre-orders of Galaxy S10 and S10+ before 8, March, but somehow it replaced this option to Free $130 e-certificate, it probably encountered stock shortage of the new Galaxy buds.

In my opinion, if you work out a lot, and tired of wrapping up or getting tangled of the cords, you can choose a pair of suitable wireless earbuds, by the way, the Qi-enabled ones fit Samsung Galaxy S10 perfectly with its dashing reverse wireless charging capability, somehow prolonging the on-the-go battery life of your earbuds. The Galaxy S10 supports Bluetooth 5.0 so it’s compatible with most wireless earbuds on the market.

The Samsung Galaxy Buds are the successor of Gear IconX and they both are true wireless earbuds, Galaxy Buds will last up to six hours for music playing on a single charge and support Qi wireless charging with the charging case. They are currently not available on the market and the release date is the same as Samsung Galaxy S10, 8 March. 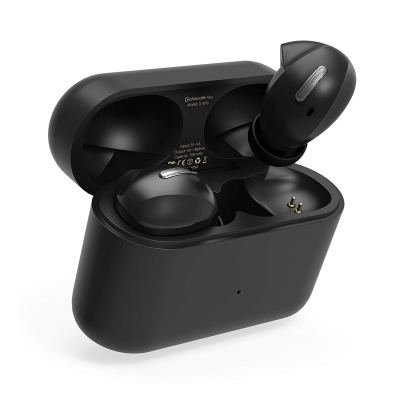 If the battery life of your wireless earbuds can last like 36 hours, you might not consider the lack of Qi-wireless charging capability as a big issue. With GoNovate Airo wireless headphones you can get 6+ hours playtime and extra 30 hours with the charging case, the premium audio quality and comfortable in-ear design get Airo ranked the best seller at Amazon and 4.5 star rated.