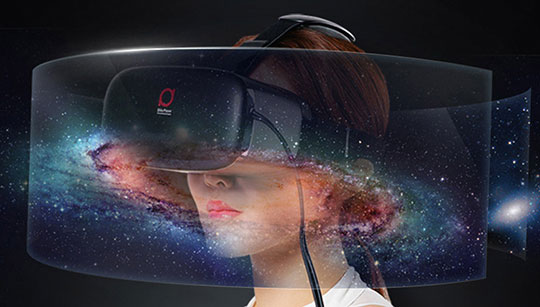 VR is the future. It will not only be applied be make our entertainment much more funny, like watching movies, playing games, “visiting” places, but also contribute to health care projects like surgery. Samsung is in the swim and it has already produced several smartphones that are VR available, such as Galaxy S7, Galaxy S6, Galaxy S6 edge, Galaxy Note 3, Galaxy Note 5 and more. In this article, I’ll introduce the best virtual reality glasses for you which will make the VR experience awesome.

Samsung Gear VR 2017 version is a newest one which suits for Galaxy S8, S8+, S7, S7 edge, Note5, S6 edge+, S6, S6 edge and comes with a motion controller. It is expensive in price—-105 dollars, but the high quality provided deserves such a big figure.
One the one hand, since is developed by with the cooperation of Samsung and Oculus VR, it’s compatible with the Oculus VR app store. On the other hand, the controller gives you a better perspective and the ability to go farther than ever before. Moreover, it feels lighter to wear and suits you well despite what your facial structure is. And here is an interesting function to mention: when Oculus Rooms and Parties are set, you can “stay” with your friends who are far away from your and spend a good time together.
Click here to read the overall review of Samsung Gear VR.

Although I’d like to say Samsung Gear VR is absolutely attractive, I have to admit that 105 dollars is just too expensive for most of us. So here comes a much cheaper one—-SIDARDOE 3D VR Glasses, which costs only 17.49 dollars (with 2.5 more dollars, you’ll get a Bluetooth remote controller). It is compatible with Android and iOS smartphones that ranges from 4.7 to 6 inches and enables you to experience the immersive, fun and exciting world of VR, to enjoy 360 degree panoramic videos and photos as well as to watch 3D movies.

Sarlar 3D VR Glasses is also cost effective, and it costs just 14 dollars, even cheaper than SIDARDOE 3D VR Glasses. It is compatible with smartphones running iOS and Android operating systems ranging from 4.0 to 6.5 inches. The biggest advantage of it is that it takes care of your eyes and put zero pressure, so you won’t feel it a burden to your neck while using it. Besides, with the aspheric lens design, the frames will be more comfortable. All in all, this pair of glasses will satisfy with the low price as well as comfort provided.

Have you ever experienced VR gaming or watched films with a pair of VR glasses on? Trust me, it will be just awesome and is totally different from the games you’ve played or movies you’ve watched. VR technology has benefited us; let’s enjoy the fun brought by it.