Recently, Amazon unveiled the new member of Echo family, Echo show. Due to the extensive leak, its debut isn’t as surprising as we expected. However, speaking of its new features, it is still deserved to be bought. Now, it is available to be preordered from Amazon for $229.99, and saving $100 if buy two with code SHOW2PACK. Echo Show will be released on June 28, 2017. What is Amazon Echo?

Echo Show has the same basic capabilities as the voice-only Echo, like listening to music, asking help of Alexa and setting timers, but the built-in 7’’ touchscreen adds plenty of new functionality. As the regular Echo, Echo show has 8 built-in microphones and supports technology of beam-forming and reducing noise, so that your voice can be heard from across the room, even while music is playing. Besides, with the front-facing video camera, it can show you things. Watch video flash briefings and YouTube, see music lyrics, security cameras, photos, weather forecasts, to-do and shopping lists, and more. And all these are hands-free. You can also expect its powerful, room-filling speakers with Dolby processing for crisp vocals and extended bass response.

Deserved to be mentioned, the new function, Alexa Calling, enables you to make hands-free video calls to friends and family who have an Echo Show or the Alexa App, and make voice calls to anyone who has an Echo or Echo Dot. Tell Alexa who you want to call and she will help you. Meanwhile, this function also allows you to send a text message. There will be a notification tone and green aureole when you receive a message. Alexa calling and messaging are free. 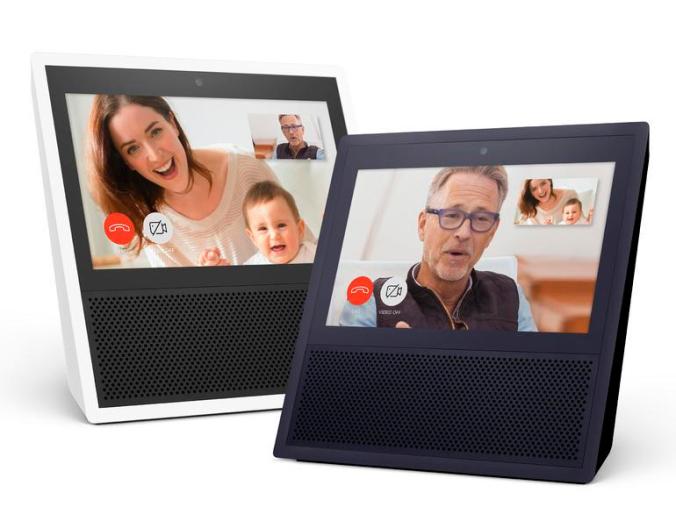 Another new function named Drop In, in brief, it’s a domestic interphone. Ask Alexa to show you the front door or monitor the baby’s room with compatible cameras from Ring and Arlo. Turn on lights, control thermostats and more with WeMo, Philips Hue, ecobee, and other compatible smart home devices.

How to use Echo Show?

Its set up and usage are simple. The key to making sure the Echo Show runs smoothly is the Alexa app, which works for iPhones, iPads and Android phones and tablets. After plugging the Echo Show in, you use the app to connect the speaker to Wi-Fi. With Alexa, all things are done by voice command.

Use the Alexa App to connect services you already use like Spotify, Pandora, and Google Calendar as well as to set up your smart home devices. Control your timers and set custom tones for your alarms, and much more. Alexa App is available for iOS, Android, and Fire devices.