It has been officially announced Samsung Galaxy S8 is coming on 29th March and will ship to consumers in April. Much narrower bezel and bigger, dual-curved display is already not under wraps. Possible most-anticipating feature is the facial recognition and iris scanning, chances also come to the migration of fingerprint sensor which was showed on the right of the back camera lens in the photos leaked by the famous spoiler Evan Blass. 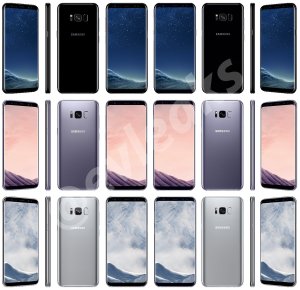 Even though Samsung got involved in one of the biggest tech scandal–exploding Note 7 and global recall last year, however, there’s no denying that Galaxy S7 & S7 Edge is the top Android smartphone which lead the trend of curved display and waterproof specs in this industry. It was assumed the Galaxy S7 & S7 Edge would be Qualcomm Quick Charge 3.0 capable since both phones feature the Snapdragon 820 processor, but it turned out to be a disappointing story eventually, at least in the US unfortunately both of them only support Quick Charge 2.0.

Will Samsung Galaxy S8 be compatible with Quick Charge 3.0?

According to the rumors Samsung Galaxy S8 & S8 Plus most likely will feature a Qualcomm Snapdragon 835 processor, which is the most advanced chip Qualcomm had developed currently. The 835 chip ensures a fast and long-lasting charge with Quick Charge 4 technology, which is an upgraded version of Quick Charge 3.0 and of course backwards compatible with it. The promotion slogan made for Quick Charge 4 is well known– 5 minutes of charging equals to 5 hours of battery life.

If you are still wondering whether Samsung Galaxy S8 will support Quick Charge 3.0 or not, just consider what happened to S7 last year. It turns out that Samsung is using different processors for different markets. Apparently utilization of proprietary Exynos 9 processor occupies the 1st priority, we can see that from the historical Galaxy S6 which sported the Exynos processor in every region. Possibly Galaxy S8 would go back to the old ways to keep this tradition.

Whichever chipset the Samsung Galaxy S8 will sport, undoubtedly it is poised to snag the best ever processor to power the upcoming fabulous specs. Even if Samsung Galaxy S8 doesn’t feature Qualcomm processor, their own fast charging technology had been well upgraded and commonly applied in the flagship phones, I assume it would not live up to its good reputation so far. Like the old sayings, sometimes ever, sometimes never. Samsung Galaxy S8 is able to save this troubled company or not, the answer is already on the way.